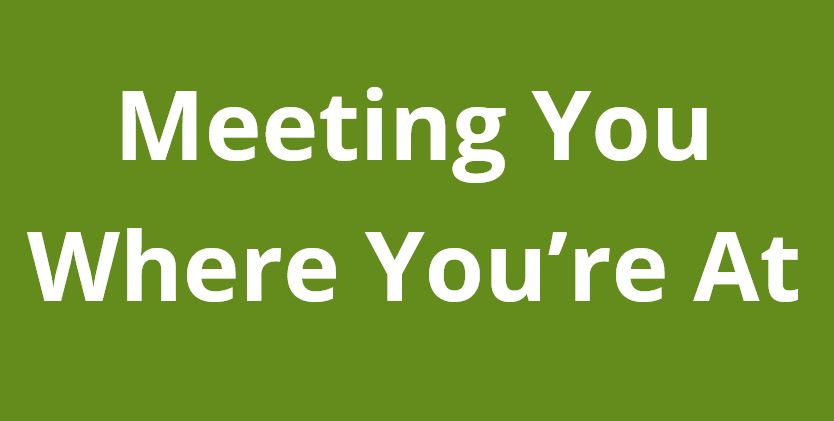 I’m not a fan of clichés. And the healthcare world uses them a lot. One of the most recent being “Meeting You Where You’re At.” A cliché is an expression, idea, or element of an artistic work which has become overused to the point of losing its original meaning or effect, even to the point of being trite or irritating, especially when at some earlier time it was considered meaningful or novel. (Wikipedia) Take Control is guilty of this, I’ve heard the phrase “meet them where they’re at” at many staff meetings. I cringe every time I hear it. Don’t tell the boss.

Last night I was watching an episode of “Queer Eye” -- the TV series on Netflix where a person is nominated by friends or family to have five gay men give them a makeover. In this episode, the Fab Five are helping a scraggly summer camp program director named Joey get a new look to reflect his position of authority, as well as make a home for his 13-year-old son, with whom he’s been estranged for many years.

Joey is a long-haired, bearded, bandana-wearing, unselfish "kid at heart" who spends most of his time outdoors and rarely showers. He’s a recovering alcoholic, who had been homeless for a while, and for the first time in years, he’s putting down roots and gaining back his confidence. He used to love to cook, but he hasn’t in years. He’s trying to rebuild a relationship with his son, using summer camp to create memories to last after his son returns to mom for the school year. After the makeover, near the end of the episode, Joey is sitting down with the Fab Five and he says “I’m grateful that you met me where I was.” Oh no, the cliché! But for the first time, rather than cringe at the words, it really hit me what he meant: they didn’t try to make him something that he wasn’t.

Joey doesn’t shower very often. Rather than telling him to take more showers and conform to someone else’s ideals, they show him how to choose clothing that won’t retain body odor. They show him hair products that will keep his hair looking good in between shampoos. He’s not the type of person who would go to a hair salon, so they take him to a mobile barber shop where he feels more comfortable getting his hair cut. Joey used to love cooking over an open fire, so when they plan a meal for him to cook, they choose a roast to cook spitted over a campfire. They took a foundation he already had, and encouraged him to re-engage it.

Take Control operates in the same way. If you don’t like gyms, we don’t tell you to join a gym. If you don’t like vegetables, we don’t tell you to eat more vegetables. We take time to learn specifically about you – your likes, dislikes, motivators, and lifestyle. That is one of the reasons we have you create a vision statement when you first enroll. It helps both you and your coach learn about who you are, and what motivates you. The conversations you have with your coach continue to paint a picture of what works for you, what doesn’t, and what path forward will best help you achieve your vision.

Once we learn who you are, we’ll use that knowledge to make suggestions for how you can improve your health within a framework that fits your life. We put you in the driver seat, and we become your idea person, your cheerleader, and your support system.

Sometimes when you’ve been through difficult times, you lose belief in yourself. You may do what Joey did in the show -- focus on others rather than taking care of yourself and your own needs or health. We help you take the time to re-direct your energy back to caring for yourself. It will boost your belief in yourself, which puts you in a much better position to care for others.

Everybody’s story is different, and everybody’s path to good health is different. The media often portray a quick fix. Our program is one year long because there is no such thing as a quick fix. We take the time to find out what works for each person, which includes real life trial and error. So yes, we’ll “meet you where you’re at” – we won’t try to make you something you’re not. We will learn what foundation you already have, and encourage you to re-engage it.